Like Sleeping Beauty’s castle, Court of Noke was run down and the grounds overgrown until Emma and Edward rescued it and restored it to a new level of colourful comfort and homeliness, qualities which characterise Christmas time. It was around Christmas time that the couple first decided to leave London to set up Edward’s own design practice and to start a family. They were irresistibly drawn to Herefordshire where Edward was brought up. Not only is it the most beautiful unspoilt part of England, and especially at Christmas time, but Herefordshire has attracted the artisan type and is full of great craftsman, cabinet makers, blacksmiths and rug makers, so for an interior designer like Edward, it is the perfect place to live.

All images in this feature (30) 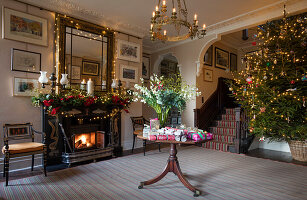 More features from this photographer

An 1884 mansion has been given a dazzling new personality by Jane & David; UK

Re-orientating their house to compensate for a lost view, Emma and Gavin Sheridan achieved …